Melaka is only 2 hours bus ride from KL airport and a good stopping off point on the way to Singapore- assuming you’re busing over the border. The Malaysian atmosphere was immediately familiar and I liked the city a lot. It’s very compact and has more museums per sq metre than anywhere else I know. Firstly a Portuguese colony, then taken over by the Dutch, followed by the British, then back to the Dutch before finally being given back to Malaysia, Melaka was the major port for Indian, Chinese and Arab traders. Identified by its distinctive red stone buildings, Meleka fell into decline as Singapore and Penang (under British rule) rose in importance and it is only recently that the city has been restored to its former glory and received UNESCO World Heritage status.

I indulged in my favourite pastime of strolling round the city, occasionally ducking into a gallery, museum or temple, meandering along the lovely canal and laughing out loud at the OTT tuk tuks. I also replaced most of my clothes which, after 6 months, I was pretty bored with and also my faithful, if rather whiffy, sandals! I also ruthlessly ditched items which I felt hadn’t earned their keep, reducing down to 14kg.

Bag refreshed and final indulgences in Malaysian street food satisfied (peanut sauce fondue taking fish, meat and veg satay to a whole new level), I headed over the border to Singapore and soon found myself down in the pristine underground – about as far removed from a Hello Kitty tuk tuk as you can get. Luckily I surfaced in Chinatown, where my Airbandb was located, so felt right back at home.

First impression walking round? What a bizarre city. It architecture is like a mini London. There’s a small scale St. Paul’s dome on top of the National Gallery, a clock which strikes like Big Ben, Raffles Hotel (famed for concocting the Singapore Sling) which could be the Dorchester, Shakespeare Theatre, a few pubs and a compacted Square Mile. Because the city is so small the banks loom over the cricket pitch which is adjacent to the Cathedral, which is next to the Arts Complex, which is astride the harbour, which is dominated by the 3 Marina Bay Sands towers. If these are Singapore’s vital organs then the cutesy Quays are its arteries and shopping malls with integrated food courts its veins. After months of night markets and street food it was actually quite nice to enjoy these shiny, squeaky clean places and they weren’t at all expensive.

Highlights of my 48 hours were: strolling through the lush Marina Bay Gardens; enjoying the juxtaposition of old and new architecture; stumbling upon quirky sculptures; an evening concert in the bay featuring a swing band with an academy of swing/jive students dancing to their old-time tunes and, best of all, queuing for over an hour to buy ‘soya chicken, crispy pork and rice’ from Singapore’s first Michelin Star hawker stall, the accolade having been awarded 3 days previously. The cost – just £2. 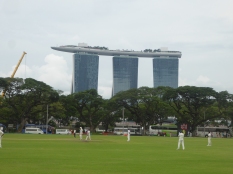 Before my short trip to Australia gets underway, I’ve made a note of a few things which I HAVEN’T done since I left the UK in January:

Nett result:- a happy, healthy, about-to-be 59 year old having the time of her life!

One thought on “Melaka & Singapore – 48 hours a piece”